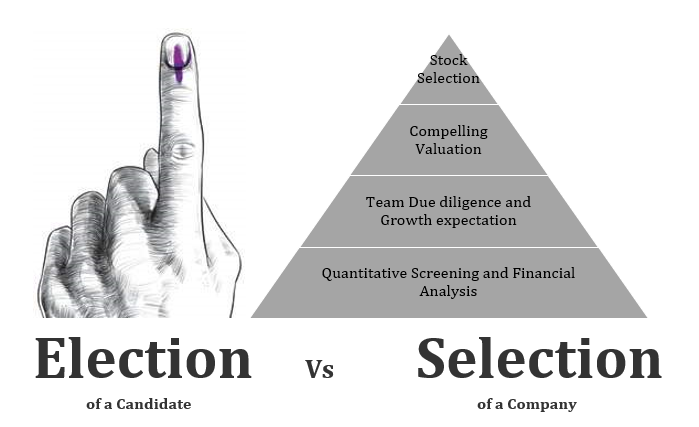 Clearly one of the hottest topic and all eyes are on the Election of the country. We are now in the last phase and of course so many people with so many views and this Sunday, with exit polls the excitement is likely to take be taken to the next level. It has been indeed one of the very important events for the country and as it has been said the festival of democracy is going on. So, what is it that this election is being given so much of importance is being given from a stock market perspective?

Two questions that are making people nervous and anxious at the same time!

As Mr. Buffett says “In the business world, the rear view mirror is always clearer than the windshield” Let us have some rear view before we move on…

Look at the stock markets behaviour over the past 39 years during 13 different governments; when you are invested for the length of a normal term of government, the nervousness and anxiety should reduce. 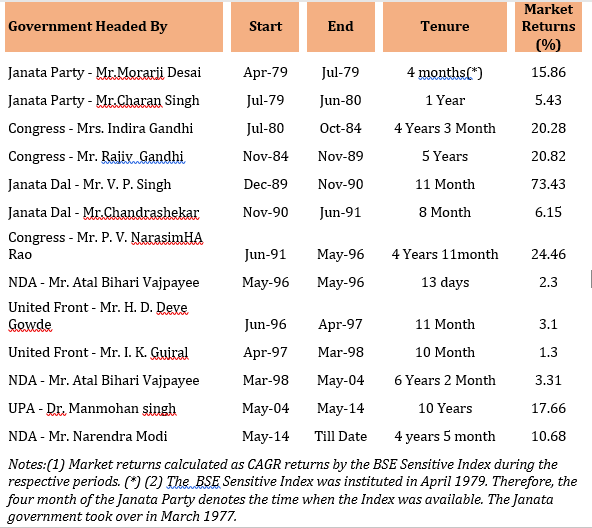 As is evident, equity returns do not show any significant divergence from the long-term positive trend of wealth creation across different prime ministers despite successive governments being led by so-called different political ideologies, have stuck to business and policy continuity. Policy tweaks have happened, but the direction of reforms has not been diametrically opposite.

The policy changes have been a continuous process. At times, the focus has been on infrastructure, at times on exports, on agriculture, power etc. So different political leaders have initiated steps to address issues in each area at different points in time depending on the circumstances of each time. So, policy changes across sectors with a change in political leadership is constant.

then, our guess is that as an investor, your job is done well.

We are at a juncture where investors would want to time their entry linking it date election of the outcome. The point, however, is that while the timing may be important, selection of the right companies supersedes timing.

A return analysis across various time horizons and market capitalizations corroborate the age-old portfolio theory that spending more time in the equity market is far more important rather than trying to time the market.  Hence, it is important for investors to select a good company and stay more time.

To conclude, below are our comments on the thought process at the time of (General) Election and Selection (of stocks). Notwithstanding the fact, the timing of the market is easier said than done.